Toshiba’s management has come under fierce criticism from shareholders, despite investors approving plans to sell its valuable memory chip unit.

The company needs money to plug a gaping hole at its US nuclear unit Westinghouse, which filed for bankruptcy protection on Wednesday.

Due to the woes at Westinghouse, Toshiba is struggling with debt that some warn might threaten its future.

One investor said management had turned Toshiba “into a laughing stock”.

“You have no clue what’s going on,” the investor added, speaking at a shareholder meeting that approved the sale of Toshiba’s NAND flash memory unit. 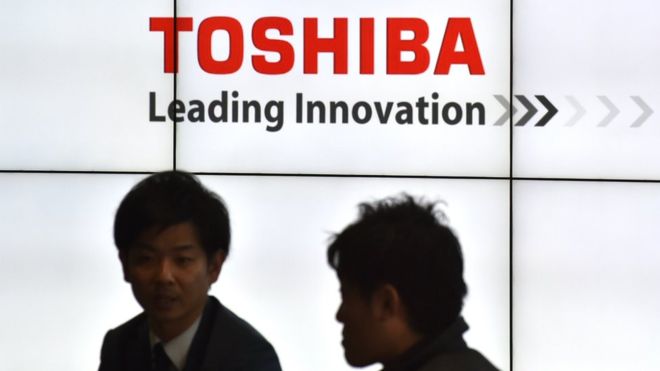 The company has twice postponed its annual earnings and is now expected to file a net loss of 1tn yen ($9bn, £7.bn), which would be one of the biggest losses in the country’s corporate history.

The Japanese conglomerate estimates its memory business to be worth $18bn (£14bn) and plans to sell parts or all of it.

According to media reports, the potential buyers for the memory chip unit include US firms Western Digital and Micron Technology as well as South Korea’s SK Hynix.

“How can something that was supposed to be a pillar turn into a hole,” one of the shareholders asked about the firm’s nuclear business.

“We apologise to all stakeholders, including shareholders, for causing this trouble and worry over our nuclear business,” he said.

Westinghouse has suffered huge cost overruns at two US projects in Georgia and South Carolina.

By having the subsidiary file for bankruptcy protection in the US, Toshiba hopes to shield itself from even more costs in the future.