The radio-frequency identification (RFID) chip is made from Pyrex glass and contains an antenna and microchip, with no need for batteries.

Instead of using identification cards and pass codes, all the staff at companies based in the Swedish tech business incubator Epicentre are using microchips implanted into their hands to get into and around the workplace.

All each member of staff has to do is wave their hand in front of a sensor and the door opens.

Each hand-implanted chip currently also enables staff at the office complex, opened at the end of the January, to operate a photocopier and swap contact details via a smartphone.

“It felt pretty scary, but at the same time it felt very modern, very 2015,” said Lin Kowalska, who works for the charity GiveSome in the building, shortly after she was chipped.

The high-tech Epicenter office block aims to bring innovative companies – large and small – together under one roof. Co-founder and CEO Patrick Mesterton said his office complex was the ideal location to test such a technology.

“The chip is about 12mm in size and put in with a syringe,” he said.

“It sends and RFID code, so it’s an identification tool that can communicate with objects around you. So you can open doors using your chip, you can do secure printing from our printers with the chip but you can also communicate with your mobile phone, by sending your business card to individuals that you meet.”

While the current range of benefits the chip offers is rather limited, Mesterton said the aim is to explore what possibilities the chip represents, and see how products and services can be developed around the technology.

In future, as the applications that can be used with the chip are developed, the hope is that workers in the building will be able to purchase food in the canteen and even check their health.

Masterson said that unlike a mobile phone, the chip could not be tracked, and he did not see any integrity issues.

“You have your own identification code and you’re sending that to something else which you have to grant access to, so there’s no one else that can sort of follow you on your ID, so to say. It’s you who decides who gets access to that ID,” Mesterton said.

The chipping is entirely voluntary and, according to the manufacturers, completely safe.

Since the amount of metal in the chip is so small, there is no risk of it setting off metal detectors and it is also safe during MRI scans and when using an induction oven. It is also very unlikely to break inside the body as it is buffered by the surrounding skin and tissue. 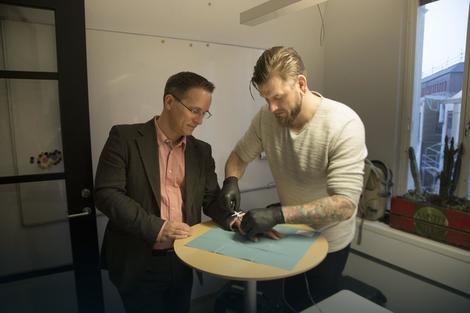