University of Washington (UW) engineers have developed a sensor package that is small enough to ride aboard a bumblebee, poised to help farmers.

Drones and larger machines have previously been used to help monitor crop health, temperature, and humidity, but there were some drawbacks. These larger systems required more power and could only travel a limited distance before recharging, according to UW. Bees, on the other hand, already take care of the flying components, while the sensor package can handle up to 7 hours of flight, and recharge at night when the bees return to their hive.

“Drones can fly for maybe 10 or 20 minutes before they need to charge again, whereas our bees can collect data for hours,” says Shyam Gollakota, associate professor in the UW’s Paul G. Allen School of Computer Science & Engineering, and senior author of the research. “We showed for the first time that it’s possible to actually do all this computation and sensing using insects in lieu of drones.”

Although bees require less power, there are two complications with this system that UW engineers had to address:

The bees cannot carry a significant amount of weight.
For location tracking, GPS receivers consume too much power.
Researchers first decided to use bumblebees for the study, since they’re large enough to handle a heavier payload.

“We decided to use bumblebees because they’re large enough to carry a tiny battery that can power our system, and they return to a hive every night where we could wirelessly recharge the batteries,” says Vikram Iyer, doctoral student in the UW Department of Electrical & Computer Engineering, and co-author of the research.

Next, they designed a sensor “backpack” system that weighs 102 mg. The backpack’s rechargeable battery took up 70 mg, which gave designers “a little over 30 milligrams left for everything else, like the sensors and the localization system to track the insect’s position,” according to research co-author and doctoral student in the Allen School Rajalakshmi Nandakumar.

To address the problem of bee localization without using power-hungry GPS receivers, the team “set up multiple antennas that broadcasted signals from a base station across a specific area. A receiver in a bee’s backpack uses the strength of the signal and the angle difference between the bee and the base station to triangulate the insect’s position,” according to UW.

Next on the agenda was to add a few more sensors to the backpack that could monitor light intensity, temperature, and humidity. Now, the bees could collect valuable data, log their location, and safely fly around the farm. After the bees returned to the hive at the end of the day, the backpacks uploaded their data via back scattering, “through which a device can share information by reflecting radio waves transmitted from a nearby antenna,” according to UW.

There is still work to be done. Currently, the system can only carry sensors that collect small amounts of data, with the backpack storing around 30 kilobytes. In addition, data uploads only occur when the bees are in their hive. According to UW, future goals include adding a camera in the mix, which could livestream plant health information to farmers.

“Having insects carry these sensor systems could be beneficial for farms because bees can sense things that electronic objects, like drones, cannot,” says Gollakota. “With a drone, you’re just flying around randomly, while a bee is going to be drawn to specific things, like the plants it prefers to pollinate. And on top of learning about the environment, you can also learn a lot about how the bees behave.”

“For this research we followed the best methods for care and handling of these creatures,” assures Iyer. 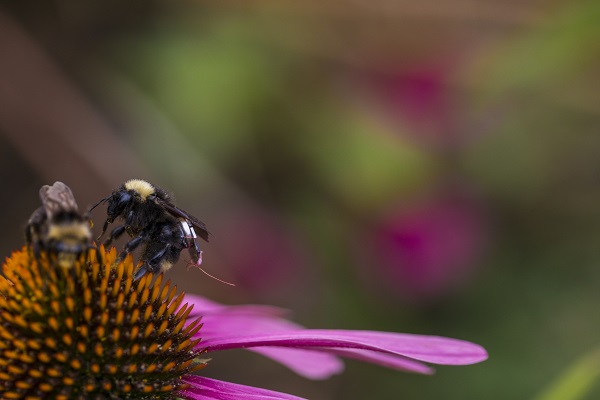 Caption: Bees with “backpacks” on can still eat, control their flight and perform other normal behaviors.
Credit: Mark Stone/University of Washington