Commercial and industrial robots are now widely used by doing things cheaper or with greater accuracy and reliability than people. Robots are used for jobs that are too dirty, dangerous or tedious to be suitable for people.

Let’s see how it all started and when.

We have evidence that mechanized human-like figures date back to ancient times to Greece. The concept of an artificial man is found in works of fiction since the early 19th century. Despite these initial thoughts and representations, the dawn of the robotic revolution began in earnest in the 1950s.

George Devol invented the first digitally operated and programmable robot in 1954. This ultimately laid the foundation of the modern robotics industry.

Around 270 B.C. an ancient Greek engineer named Ctesibius made water clocks with automatons or loose figures. Greek mathematician Archytas of Tarentum postulated a mechanical bird he called “The Pigeon” which was propelled by steam. Hero of Alexandria (10–70 AD) made numerous innovations in the field of automata, including one that allegedly could speak.

In ancient China, an account about an automaton is found in the text, written in the 3rd century BC, in which King Mu of Zhou is presented with a life-size, human-shaped mechanical figure by Yan Shi, an “artificer.”

Writers and visionaries envisioned a world including robots in daily life. In 1818, Mary Shelley wrote “Frankenstein,” which was about a frightening artificial lifeform come to life by a mad, but brilliant scientist, Dr. Frankenstein.

Then, 100 years later Czech writer Karel Capek coined the term robot, in his 1921 play called “R.U.R.” or “Rossum’s Universal Robots.” The plot was simple and terrifying; the man makes a robot then robot kills a man.

In 1927, Fritz Lang’s “Metropolis” was released. The Maschinenmensch (“machine-human”), a humanoid robot, was the first robot ever to be depicted on film.

Science fiction writer and futurist Isaac Asimov first used the word “robotics” in 1941 to describe the technology of robots and predicted the rise of a powerful robot industry.

Asimov wrote “Runaround,” a story about robots which contained the “Three Laws of Robotics,” which centered around Artificial Intelligence ethics questions.

Norbert Wiener published “Cybernetics,” in 1948, which formed the basis of practical robotics, the principles of cybernetics based on artificial intelligence research.

British robotics pioneer William Grey Walter invented robots Elmer and Elsie that mimic lifelike behavior using elementary electronics in 1948. They were tortoise-like robots that were programmed to find their charging stations once they started running low on power.

In 1954 George Devol invented the first digitally operated and a programmable robot called the Unimate. In 1956, Devol and his partner Joseph Engelberger formed the world’s first robot company. In 1961, the first industrial robot, Unimate, went online in a General Motors automobile factory in New Jersey.

With the rise of the computer industry, the technology of computers and robotics came together to form artificial intelligence; robots that could learn. The timeline of those developments follows:

1959 Computer-assisted manufacturing was demonstrated at the Servomechanisms Lab at MIT
1963 The first computer-controlled artificial robotic arm was designed. The “Rancho Arm” was created for physically disabled people. It had six joints that gave it the flexibility of a human arm.
1965 The Dendral system automated the decision-making process and problem-solving behavior of organic chemists. It used artificial intelligence for identifying unknown organic molecules, by analyzing their mass spectra and using its knowledge of chemistry.
1968 The octopus-like Tentacle Arm was developed by Marvin Minsky. The arm was computer controlled, and its 12 joints were powered by hydraulics.
1969 The Stanford Arm was the first electrically powered, computer-controlled robot arm designed by mechanical engineering student Victor Scheinman.
1970 Shakey was introduced as the first mobile robot controlled by artificial intelligence. It was produced by SRI International.
1974 The Silver Arm, another robotic arm, was designed to perform small-parts assembly using feedback from touch and pressure sensors.
1979 The Standford Cart crossed a chair-filled room without human assistance. The cart had a tv camera mounted on a rail which took pictures from multiple angles and relayed them to a computer. The computer analyzed the distance between the cart and the obstacles. 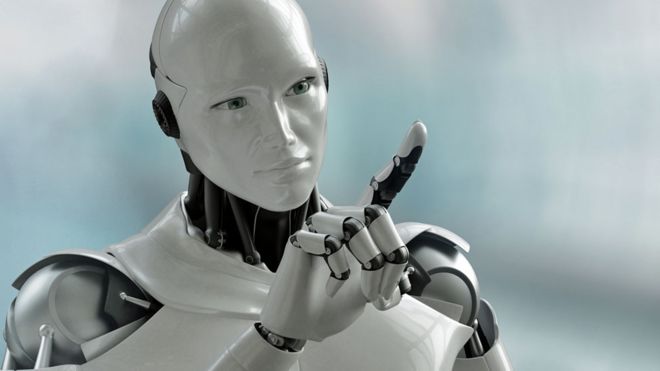