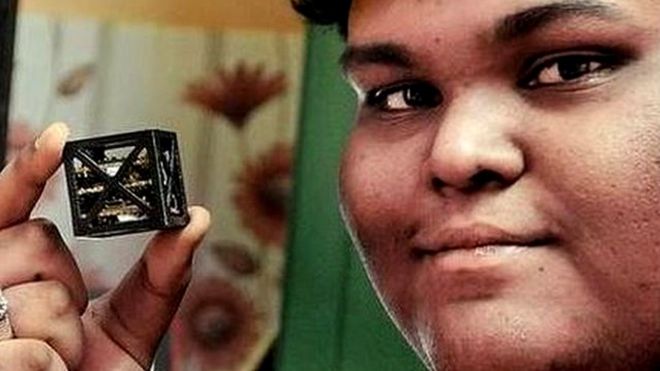 An Indian teenager has built what is thought could be the world’s lightest satellite, which will be launched at a Nasa facility in the US in June.

Rifath Shaarook’s 64-gram (0.14 lb) device was selected as the winner in a youth design competition.

The 18-year-old says its main purpose was to demonstrate the performance of 3-D printed carbon fibre.

Rifath told local media his invention will go on a four-hour mission for a sub-orbital flight.

During that time, the lightweight satellite will operate for around 12 minutes in a micro-gravity environment of space.

“We designed it completely from scratch,” he said. “It will have a new kind of on-board computer and eight indigenous built-in sensors to measure acceleration, rotation and the magnetosphere of the earth.”

The satellite has been named KalamSat after former Indian president Abdul Kalam, a pioneer for the country’s aeronautical science ambitions.

His project was selected in a challenge called Cubes in Space, organised by education company idoodle with support from Nasa and the Colorado Space Grant Consortium.

Newcomer scientist Rifath comes from a small town in Tamil Nadu and now works as lead scientist at Chennai-based Space Kidz India, an organisation promoting science and education for Indian children and teenagers.

The KalamSat is not his first invention: at the age of 15, he built a helium weather balloon as a part of nationwide competition for young scientists.