London City is to become the first UK airport to replace its air traffic control tower with a remotely operated digital system.

Instead of sitting in a tower overlooking the runway, controllers will be 120 miles away, watching live footage from high-definition cameras.

The new system, due to be completed in 2018, will be tested for a year before becoming fully operational in 2019.

It has already been tested in Australia, Sweden, Norway and Ireland.

The technology has been developed by Saab, the Swedish defence and security company, and will be introduced as part of a £350m development programme to upgrade London City Airport.

It will also include an extended terminal building, enabling it to serve two million more passengers a year by 2025.

The remote digital system will provide controllers with a 360-degree view of the airfield via 14 high-definition cameras and two cameras which are able to pan, tilt and zoom.

The cameras will send a live feed via fibre cables to a new operations room built at the Hampshire base of Nats, Britain’s air traffic control provider.

As well as being able to see it, controllers will be able to hear the airport, as if they were in situ.

Unlike the old tower, the new system will allow controllers to zoom in for a better view and put radar data onto the screen to track aircraft.

BBC transport correspondent Richard Westcott says a critical new safety feature means the cameras will be able to pick out rogue drones near the airport, as well as light the runway at night.

Responding to questions about safety and potential system failure, London City Airport said it been independently stress-tested by security specialists. 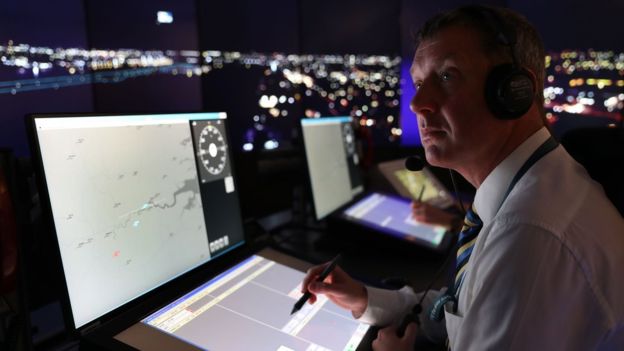 The system will use three different cables, taking different routes between the airport and the control centre, to ensure there is a back up if one of those cables fails.

Declan Collier, London City Airport chief executive, said he was “absolutely confident” that the system is safe from the threat of a cyber attack.

“No chief executive is complacent about threats from cyber security,” he said.

“But we are very confident that the systems we’re putting in place here are secure, they’re safe, they’re managed very well.”

The airport is planning to decommission its traditional tower in 2019, replacing it with a new 164ft (50m) digital tower – 104ft (32m) taller than the existing one.

The system made its world debut in Sweden at Ornskoldsvik Airport, where flights have been controlled by a remote tower in Sundsvall, 110 miles (177km) away, since 2015.