Devices with Quick Charge 4 technology can get up to five hours of battery life on a five-minute charge, says Qualcomm.

You’ll soon be able to get five hours of battery life faster than you can make popcorn. Qualcomm debuted the fourth generation of its super-fast charging technology, dubbed Quick Charge 4, on Thursday. It’s set for release in the first half of 2017.

Quick Charge 4 will provide up to five hours of battery life on a five-minute charge, Everett Roach, Qualcomm’s senior director of product management, said at the Snapdragon Tech Summit on Wednesday.

“We put a lot of hard work and engineering into new products, and we’re gonna deliver what we hope is a much better charging experience from 2016,” Roach said.

The charging capabilities will also be integrated into Qualcomm’s next generation of mobile processors, including the Snapdragon 835. Battery life has always been a concern for device owners, but its importance has grown exponentially as phones and tablets became larger and more powerful, Roach said. Fast charging has become a top priority for 61 percent of phone buyers, Qualcomm found in a study. 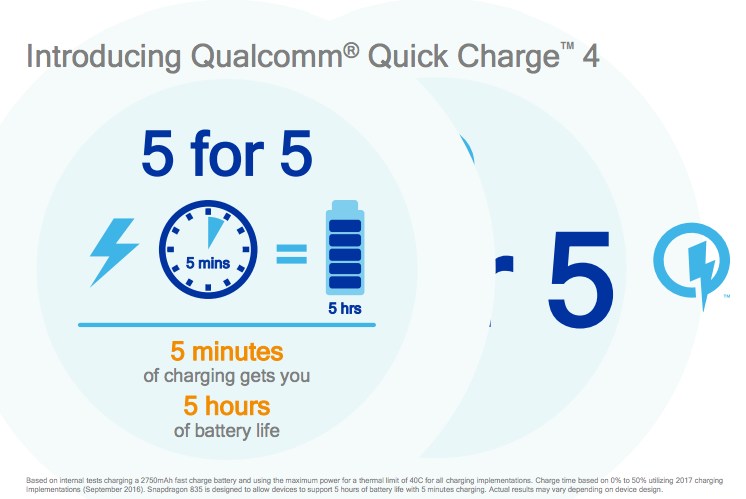 Quick Charge uses an algorithm that Qualcomm calls Intelligent Negotiation for Optimum Voltage (INOV), which manages how much power your devices request through charging cables. The Quick Charge 4 update also includes heat management to make sure your phone or tablet doesn’t overheat while charging, an issue that effectively killed off Samsung’s Galaxy Note 7.

Roach said safety was a major concern for Qualcomm. On the outlet end, wall chargers and other devices using Quick Charge 4 will have protections to prevent overcharging and overheating. Phones using the Snapdragon 835 will get three levels of current and voltage protection, as well as four levels of protection to stop overheating. The processor will also help manage battery life, pushing for longer usage.

Qualcomm is boasting a 20 percent faster charge time with 30 percent more battery efficiency compared the previous generation of Quick Charge. That means saving two to three minutes for charging while getting an extra one or two hours before having to plug your phone back in.

Quick Charge 4 also will keep your phone’s temperature cooler by up to 5 degrees Celsius, compared with the last generation.

“Quick Charge 4 addresses that need by providing up to 50 percent battery charge in roughly 15 minutes or less, so you don’t have to spend all day chained to your charging cable,” Alex Katouzian, Qualcomm’s vice president of product management, said in a statement.