An MIT spinout is preparing to commercialize a novel rechargable lithium metal battery that offers double the energy capacity of the lithium ion batteries that power many of today’s consumer electronics.

Founded in 2012 by MIT alumnus and former postdoc Qichao Hu ’07, SolidEnergy Systems has developed an “anode-free” lithium metal battery with several material advances that make it twice as energy-dense, yet just as safe and long-lasting as the lithium ion batteries used in smartphones, electric cars, wearables, drones, and other devices.
“With two-times the energy density, we can make a battery half the size, but that still lasts the same amount of time, as a lithium ion battery. Or we can make a battery the same size as a lithium ion battery, but now it will last twice as long,” says Hu, who co-invented the battery at MIT and is now CEO of SolidEnergy.

The battery essentially swaps out a common battery anode material, graphite, for very thin, high-energy lithium-metal foil, which can hold more ions — and, therefore, provide more energy capacity. Chemical modifications to the electrolyte also make the typically short-lived and volatile lithium metal batteries rechargeable and safer to use. Moreover, the batteries are made using existing lithium ion manufacturing equipment, which makes them scalable.

In October 2015, SolidEnergy demonstrated the first-ever working prototype of a rechargeable lithium metal smartphone battery with double energy density, which earned them more than $12 million from investors. At half the size of the lithium ion battery used in an iPhone 6, it offers 2.0 amp hours, compared with the lithium ion battery’s 1.8 amp hours. 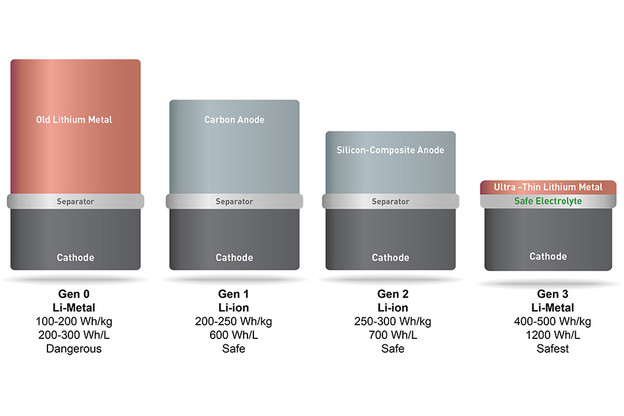 SolidEnergy plans to bring the batteries to smartphones and wearables in early 2017, and to electric cars in 2018. But the first application will be drones, coming this November. “Several customers are using drones and balloons to provide free Internet to the developing world, and to survey for disaster relief,” Hu says. “It’s a very exciting and noble application.”

Putting these new batteries in electric vehicles as well could represent “a huge societal impact,” Hu says: “Industry standard is that electric vehicles need to go at least 200 miles on a single charge. We can make the battery half the size and half the weight, and it will travel the same distance, or we can make it the same size and same weight, and now it will go 400 miles on a single charge.”