Tennis ace Caroline Wozniacki signed a deal with a Singaporean company to launch her own crypto token on Thursday, with the firm saying it hoped ex-soccer star Michael Owen or boxer Manny Pacquiao would be the first to sell such a token next year.

Singer Jason Derulo also signed a deal to launch a token with the firm earlier this year.

GCOX says the tokens will give buyers exclusive merchandise and interactions with their favourite celebrities, and that the celebrities will receive proceeds from the token sales.

“To be the first female athlete to have her own token is really cool…I am looking forward to expanding that before other people start getting into it,” Wozniacki told Reuters in an interview on the sidelines of an event to sign the deal in Singapore.

He said “if everything goes well, first quarter of 2019 will be the first celebrity token and it could be Michael’s, it could be Manny’s, I am not sure yet.”

To buy the celebrity tokens, prospective buyers must first acquire GCOX’s own tokens called ACM, the sale of which has only recently started. Lin declined to say how many ACM tokens had been sold, but said “in theory we are trying to raise $300-600 million”.

Wozniacki, who claimed her maiden Grand Slam title at the Australian Open in January, also said she was looking to carry the momentum of a strong end to the season through to a second successive WTA Finals title triumph in Singapore next week. 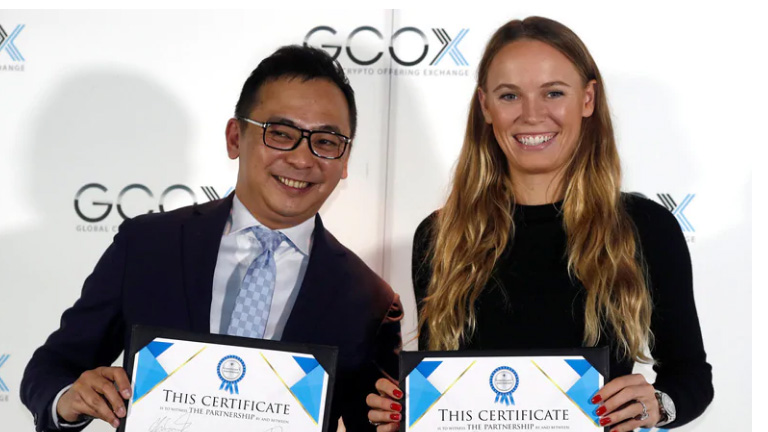