It turns out it can be pretty tough to hand a robot an object. A challenge with having robotic co-workers alongside humans on the factory floor is the ability for the two groups to interact safely. It’s been over a year since YuMi (for “you and me”) was introduced to the market to fill that divide. What does the future and the Internet of Things hold for YuMi and other collaborative robots?

While people have been marveling for years at friendly robot helpers on their screens, here’s something many probably don’t realize about robots: They’re actually heavy machinery.

And like with any other machinery on a factory floor, safety is a top consideration. The most common robots in use today are on assembly lines, building everything from cars to computers, and they are heavy and fast-moving. By design, they are traditionally separated from people by physical barriers to keep workers safe.

But even though robots are great for large, simple and fairly repetitive movements, human line workers can still do certain tasks much better. The ongoing challenge for manufacturers has been how to free robots from their industrial off-limits zones and let them work in close concert with humans as collaborative robots, blending abilities and giving factories more speed and higher quality—safely. 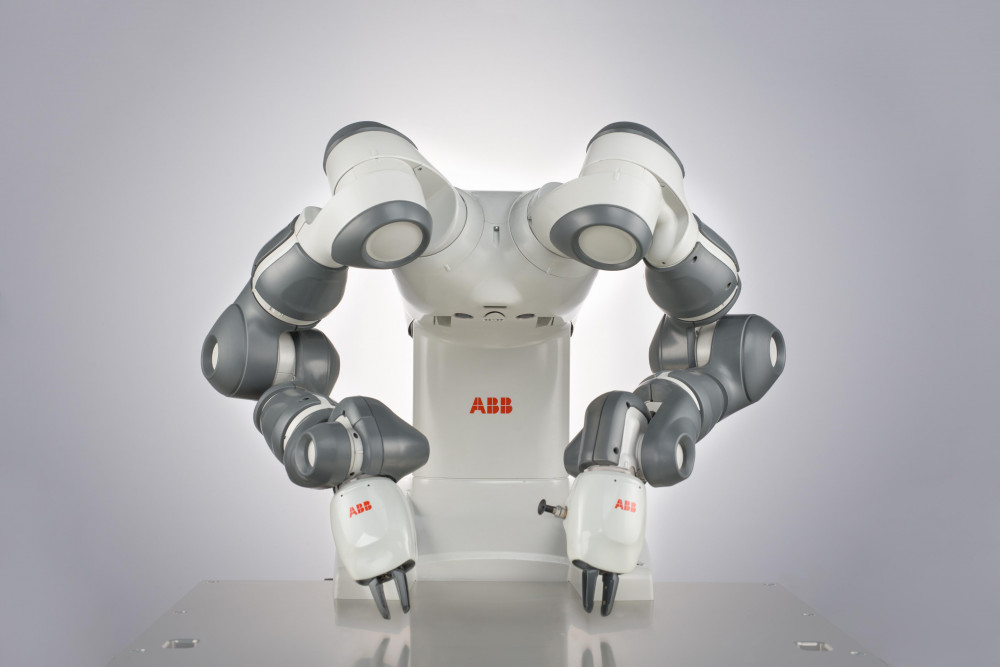 YuMi’s multijointed dual arms and grippers allow unrestricted movement throughout a much wider field than other robots of its size and class. They also make YuMi uniquely customizable for uses even ABB hasn’t envisioned yet.

According to Anders Helgeson, ABB’s head of innovation, collaborative robots that can work alongside humans have long been the mother lode (and an elusive one) of industrial robotics. “The whole industry has tried to introduce automation to the assembly line with robots—and historically struggled,” he says.

The Human Scale. If you’ve ever watched robots build a car, it’s clear they’re doing a different class of work. They operate on a larger scale, with heavier parts, and they move much faster than a human worker can.

Some robots do work with smaller payloads, but for certain tasks, a human assembly worker just performs better. Many factory tasks are uniquely suited to the mechanical systems of muscles, fingers, opposable thumbs, and keen human vision. People are also able to solve problems, improvise, and adapt to changes in ways that robots simply can’t.

But even the robots working at a human scale have traditionally needed barriers or separation zones to keep people safe, which means a factory worker can’t hand a component directly to a robot (or accept one from it) to complete the next stage of assembly. That necessary human-robot separation adds considerable time and expense to a plant’s operation.

But YuMi is built to bridge that gap. “YuMi is restricted to very low payloads, up to half a kilogram [1.1 pounds],” Helgeson says. “The weight restriction is part of the safety aspect, as is the control of the arms. You can’t put your finger between joints, so there are no pinch points. If it touches something, it automatically stops—the padding is there to absorb the energy, but the system also feels when there’s something in the way.”

Endless Applicability. But YuMi is still a robot that can do things faster, with more accuracy and infinite endurance for repetitive tasks—right? Theoretically, yes, Helgeson says, but that was never really the point.

“Some users want a robot you can program to produce a big batch,” he says. “Others require them to interact with human workers all the way through. We basically have the whole scale. The ambition is to have high flexibility in the system, but it still needs to be robust in what it’s doing.”

Say a robot is programmed for a specific motion based on a CAD drawing. In the real world, changes in the manufacturing environment aren’t going to match up exactly to the capabilities of a manufacturer’s tools, and reprogramming everything to account for adjustments might be necessary—and expensive. A robot with a virtually endless range of movement and customizable grippers, like YuMi, that can adjust with the parameters might be the saving grace of the manufacturing workflow. 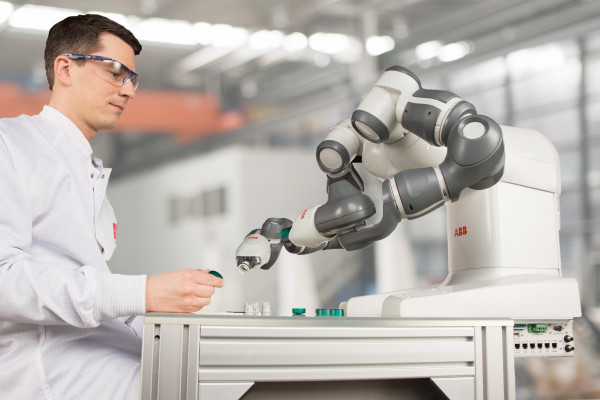 But there’s another cool new wrinkle in the means to deploy YuMi quickly: The system contains a unique programming technology that enables an operator to simply position the arms and grippers to the next position and press a button to commit the action to YuMi’s memory, generating an algorithm for the entire sequence on the fly (and, if necessary, playing it back much faster).

The other unique approach YuMi affords ABB is that, to an extent never seen before, the robot is a one-size-fits-all solution. Whereas most heavy-manufacturing robots are dedicated to doing a handful of precise tasks countless times over, YuMi is designed to replicate a human assembly worker, making it as flexible as Helgeson claims. “YuMi was a conscious decision to move away from the traditional robot to show that this is a new generation,” he says.

In fact, YuMi is limited only by the imaginations and needs of its users. Helgeson notes many uses of YuMi at work that ABB didn’t even consider—something the company is quite proud of—which means valuable feedback ABB can put toward future iterations to make the system even better.

YuMi and the Future. Helgeson talks about a whole other YuMi revenue stream to be found in an Internet of Things–style approach, in which software can produce reports, productivity predictions, and alarms that alert manufacturers to problems before they become expensive disasters.

In fact, he says that finding the perfect balance between the hardware and software is a direction ABB isn’t alone in pursuing. “I just read about this new generation of microprocessor,” Helgeson says. “You can run machine learning; you can run a lot of specialized algorithms. There’s a very interesting balance between the hardware and the software that people are going to have in the future.”

But for all YuMi’s early success and the interest in the marketplace, Helgeson talks about it being the first step on a new path for ABB and the industry. “If you go back a few years, a lot of focus was on safety, and I think YuMi is one way to solve the safety problem,” he says. Whether for safety or increased productivity, one thing is certain: YuMi is leading the way for what is sure to be an interesting future for collaborative robots in manufacturing.